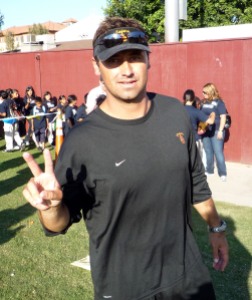 Here at TCD we’re about three things: Babes 💋 Booze 🍺 and Ball Games 🏈. Steve Sarkisian covers two of the three in the past week (sorry for passive aggressively implying that you’re not a babe, Sark #GoCougs!)

On Saturday, August 22nd Sarkisian allegedly mixed prescription medication and alcohol and yelled a long string of profanities before he was pulled off stages, resulting in him embarrassing himself in the public eye.

Here’s a video of the best clip of the speech…

I don’t know about everyone else, but I’ve seen a dude (or five) embarrass themselves at many a frat party back in my day. The only difference between that and Sarkisian, is that he is in the public eye (being the HEAD COACH at USC) and frat stars simply aren’t. Being in the public eye at almost all times requires you to really keep your sh!t together.

But here’s what gets me: SO F*&%ING WHAT! If anyone else was to go out and get plastered and string together choice words, I’m pretty sure you wouldn’t hear people making a big deal about it (unless someone dare say anything politically incorrect… But I digress). Yes he’s in the spotlight, yes he’s a role model for younger men (and women), yes he has an example to set, yes I’m sure he has university guidelines he has to follow, but at the end of the day, he’s only human!

While I do believe it was the wrong place and wrong time to say these things, what are you going to do? We can debate, and debate, and debate; we can argue about how he has a problem, how he needs to go to rehab; we can go as far as saying he needs to be fired. Apparently it has come to light that Sarkisian is also going through a divorce and man, we know that’s tough. It may not be an excuse but it should be enough for people to give the poor guy some slack.

At the end of the day, Steve Sarkisian is just like you and me. A dude who loves to get his booze on and fight on. Just like Miley Cyrus (LOL) says, “everybody makes mistakes, everybody has those days.”

WE NEED TO GET OVER IT. Even though let’s face it, this may or may not have occurred because he’s a former UW Husky… What? Who said that?

Sarkisian issued an apology Tuesday, and also stated that he will not being consuming ANY alcohol during the 2015 season. We’ll see how long that lasts… Either way, good luck with that, Sark. We all know the Cougs wouldn’t be so concerned with this BS because let’s be real #WinOrLoseCougsStillBooze.